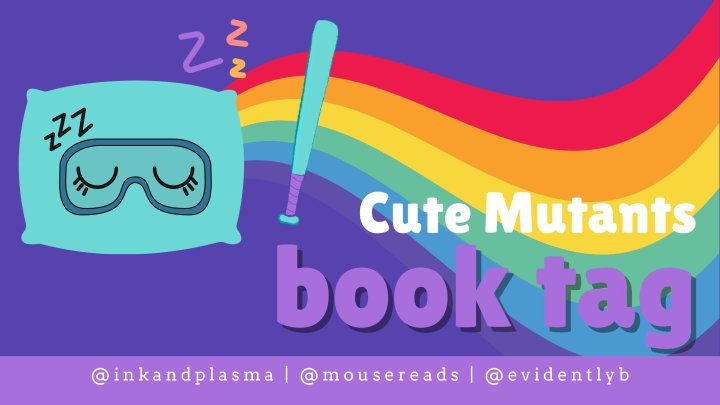 I’m here with another book tag! I know, that’s two fairly close together. But that’s because that one’s I actually want to do have been popping up. I saw about this one a while ago, and I asked to be tagged when it was done. That’s because this was based off a book I have adored. Yes, I said book. Because I still need to read the other two that are out in preparation for the fourth one. Thanks so much to El, Andee and Finn for creating this and tagging me. Check them all out too.

I might not be up to date, but I still can’t wait.

Just like the last book tag I did, I’m only going to write a little bit on each book and show you the covers. So if you’re interested in any of these books, please look into them as I promise they’re all good. As well as that I highly suggest you check out the Cute Mutants books, if you want to read my opinion on that my review is here.

For this I had to go for a character who is maybe a little sulky after some stuff that happens. And I understand why he can be pretty mean, but I still wish he was endgame with the main male protagonist. And that is Narinder from King of Fools by Amanda Foody.

This is the second book in the Ace of Spades series. This is a YA fantasy series that follows Enne Salta, a finishing school leaver who has travelled to the City of Sin to find her mother. Her only hope is to get assistance from con-man Levi Glaisyer. This book features a fascinating magic system as well as a Vegas like city filled with clubs, casinos and shows. You might be tempted to compare this to Six of Crows, but I promise this is very different and definitely worth a read.

If you’re curious about my opinions on this series then I have a review for the third book here.

I had to put this book for two prompts as after reading this recently, I just have to keep mentioning it. This book is Felix Ever After by Kacen Callender. This might not be a book you’d expect me to recommend, and I’m sure a lot of other people will be listing this one too. This book made my heart hurt so much as I felt for the protagonist, Felix so much.

Part of the pain of this book did come from relating to some aspects of this book. It follows Felix Love, a trans non-binary teen who wants to know what is is to fall in love. But he’s worried that maybe being black, queer and trans is too much and that he’ll never find love. This book was powerful and emotional and definitely one you should all be checking out.

You can read my review here.

I’m not big on monster characters, but there is a book that I adore that does feature girls who are considered monsters. And that is The Gilded Ones by Namina Forna. This is a book that has only recently come out, but I actually read an ARC of last year. This is a book I’m excited to see a lot of hype for so I hope you all read this one soon!

Deka has always dreaded the blood ceremony that she’ll attend when she comes of age. If she bleeds red then she can continue her life. But if she bleeds gold, she’s a demon. Something happens during her ceremony, and it’s revealed that Deka does in fact bleed gold. She’s sent to join an army of girls like her. The alaki all have special powers, but as Deka trains with them, she finds out that nothing and no one are quite as they seem.

This book is dark and it’s emotional. But it’s just generally a damn good fantasy book. I can’t wait to see what happens in the second.

Emma aka Goddess – A book featuring a superpower you’d love to have.

I can’t think of any with a specific power I’d like. But actually…I have to go with Cute Mutants for this! I’d love to have Alyse’s powers. To be able to change how I appear depending on how I’m feeling? That would be so damn awesome. Also great for when I get dysphoric. I could actually have the body parts that I feel like are missing. That would be fun, ha.

Cute Mutants follows Dylan, a teenage girl who has recently gained the power to talk to inanimate objects. After stumbling across another girl in school, and discovering that she’s not the only one with powers? She decides she wants to form her own X-Men like group, and they look for enemies to take down. This was a book that I majorly enjoyed – hence the whole doing this tag – but it’s a really fun series with a lot of nerdy references.

I actually already own the second book in the series, so i should really start that soon. As I want to know more about Alyse and her powers.

So many of these books have been books I’ve read fairly recently, but I don’t think that’s a bad thing. Generally the characters that I’d go to hell for are the children who pop up in some books. Those young kids that the main characters want to protect and I do too. For this one I’m going for Tipp from The Prison Healer by Lynette Noni. Again, you can read my review of this book here.

He is an adorable child who helps out in the infirmary and he was just such a good friend to the main character Kiva. There was a point that I was terrified for him, but luckily the thing that I was worried were going to happen didn’t happen. Trying to avoid spoilers here. But yeah, he was adorable. The book itself follows Kiva, a young girl who works as the healer in the infirmary of a prison. When the rebel queen joins them, she has to take her place in a trial to save their lives.

There was actually a lot of good side-characters in this book, and I wish all of them well.

Onimaru – A book with a character much cooler than you.

I had to go for Emika Chen from the Warcross for this. A teenage girl who hacks a worldwide game, and winds up involved in a competition for it? Oh, I wish I could do something like that. I loved this duology so much, and Emika is such a genuinely cool character. I loved her so much.

That basically tells you what this book is about. It follows Emika who gets caught out hacking in an important ceremony for the Warcross championship. She becomes an overnight sensation and is whisked to Tokyo to work as a spy for the game’s creator. To do this she needs to compete within the championships, but it may turn out that the creator isn’t what he seems.

I read these a while ago now, but they’re very fun and since it’s a duology, it won’t take you long. This book is actually set in the same world as Legend, but is further in the past then the original trilogy. There are definitely easter eggs for the Legend books so that’s pretty fun.

My current OTP isn’t a book couple. But I’ve pulled out the book that has my favourite book ship in and that is the Red Queen books by Victoria Aveyard. Maybe some of you are rolling your eyes at this one. But I adore this series so much, and this is a series that I’ve reread. Mare and Cal are just very much a me ship, and ughhh they’re so cute.

You probably know what this book is about, but I’ll remind you all just in case. It follows Mare Barrow, a red girl who gets caught stealing one day and gains a job in the castle. But in the castle an accident happens and it’s revealed that she has powers she shouldn’t have. The silvers decide they need to cover up the fact a red has powers, so she is forced to pretend to be a lady and is engaged to prince Maven. There’s twists, betrayals and a fascinating magic system and world.

The books are definite favourites of mine.

Batty – A book with a secondary/side character that you can’t help but adore.

A series I do not see enough people talk about for this prompt. The Defiant Heir by Melissa Caruso is the second book in the Swords and Fire trilogy and it introduces the Crow Lord, Kathe. Thinking back on him, he probably is a book boyfriend, but I kind of forget about him somehow? Kathe is a witch lord who rules a certain part of land in Vaskandar who joins up with Amalia to bring a villain from the first book down.

I really don’t want to go into details here because this is the second book. The first book, The Tethered Mage, follows Lady Amalia Cornaro who winds up accidentally trapping the magic of a girl, Zaira as she almost burns out. The two of them are forced into a partnership. As they are learning about each other and Zaira’s magic, they wind up involved in some political machinations and bad things are about to go down.

I really love these books. The world building is so fascinating, and there is a new series coming out now set in the future of this world. There is queerness, a lot of politics and just a lot of fun. I think these books are considered adult but they may also be YA so something to check out if you read YA or Adult fantasy.

Pear – A book with a family dynamic you love

Going with a much older series that I adore here and that’s the Glass books by Maria V. Snyder which starts with Storm Glass. This trilogy follows Opal Cowan, a young woman who first appeared in the Study trilogy. This is the second trilogy within the Chronicles of Ixia and is definitely one you need to pick up if you get the Study ones.

In the Study books, Opal lost her sister which was a traumatic experience for her and her family. I love the family dynamic in this book because there are hints of the loss they suffered. But despite that, they’re all still really close. I love seeing the different relationships within the family and it really is wonderful.

In these books Opal has spent time at the magical academy trying to discover how she can use her special glass magic. But when something is happening with the Stormdancer clan, she has to go see if she can figure out why the glass orbs aren’t containing the storms.

That’s the end of this tag! I’m not tagging anyone myself but I encourage you to take on this tag yourself!