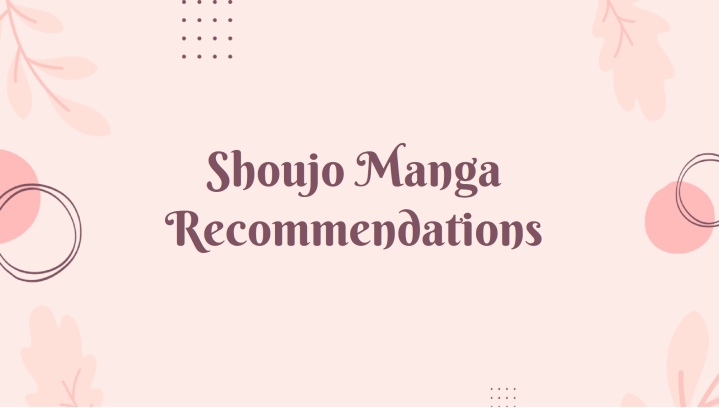 For as long as I’ve been reading manga, I’ve been predominantly reading shoujo manga. If you’d asked me earlier this year, I’d have assumed that I was starting to read less of it, but it’s been the exact opposite. I’ve been picking up more and more of it again.

So, I thought it was about time to share some of the shoujo manga that I love – and are readily available – for you to all check out.

Some of these will be the cutesy type of series that you expect hearing the word shoujo, but some less so. So give this list a read, even if you think you don’t like shoujo.

Obviously, I would have to put Sailor Moon on this list. I know it’s one you’ll all have heard of, but I can’t recommend shoujo series without shouting out my first anime and manga.

Sailor Moon is a magical girl series from the early 90s following Usagi Tsukino, a 14-year-old girl who after rescuing a cat, is given a brooch that helps her transform into Sailor Moon. She and her new friends’ task is to track down the mysterious moon princess and help her defeat Queen Beriru before she destroys the earth as she did the moon.

This is the series that led to other magical girl series becoming as prominent and as well-loved as they are in both Japan and the west. If you’re looking for a manga that’s beautiful to look at with a story that will both break your heart and make you smile? Look no further than Sailor Moon. There are some differences between the manga to the original 90s anime, so if that’s what you’re familiar with, I still recommend checking out the manga. Even if you’ve watched the closer Crystal adaptation, still read the manga.

With an amazing cast of characters, you’re certain to find a new favourite. Plus if you’re looking for a more mainstream manga with sapphic couples…you know you’ve got one here.

With magical girls being a big part of the reason I got so into anime and manga, I had to recommend another childhood favourite. Especially since the anime was recently rebooted in 2022. If you’re looking for a manga for any younger kids you know, or just want something cute for yourself that can be read by most ages? Tokyo Mew Mew is a treat for you.

Ichigo Momomiya is a clumsy teenage girl with a crush. When she gets a chance to go to an endangered species exhibition with the boy she likes, she winds up in a situation where she’s given the DNA of an Irimote Wild Cat, and with that, she’s been given powers to fight the aliens who are trying to remove life from the earth.

I probably picked up this series at the perfect time for me. I was becoming interested in endangered species, so this series gave me more to want to look into, and I felt it a lot. You kind of understand what the aliens are doing. Even if you don’t like them, you do get it.

Once again, you have a cast of multiple girls, but that means there are plenty of characters to pick from. This series is also a little shorter with one main series, and then a two-volume sequel series. On top of that, there were a few chapters of a sequel series before the manga-ka sadly passed away, and there was a separate series following a bunch of boy Mew Mews that hasn’t been translated either, but I’d love it to be.

Snow White With The Red Hair

Shirayuki is a healer in a small village with hair that’s an unusual shade of red. Her hair is considered beautiful, and due to that, the King wants to marry her. To escape, she cuts off most of her hair and runs into a neighbouring country, where she meets Prince Zen. They become close as she takes on the role of a healer’s apprentice within the palace and many adventures follow.

In a lot of ways, this is a pretty typical fantasy series, but it’s a very cute one. The art is lovely, and though I don’t ship the main ship personally, plenty of people do.

If you’re looking for a genuinely kind protagonist, and love the found family trope? This is going to be the series for you. There was also a two-season anime with a couple of OVAs, so if you’d rather watch it first? You’ll certainly enjoy it.

Yona of The Dawn

Another fantasy romance series but one with plenty of action, Yona of the Dawn is a great manga if you’re looking for a series with some fantastic world-building, plenty of political machinations and a great cast of characters. This is an Asian-inspired fantasy, I think it’s mostly Chinese, but I’m not certain. If you like dragons? This series has them, just not in the way you expect.

Yona is a spoilt princess who dreams of marrying her childhood crush. But on the day of her birthday, she stumbles in on him murdering her father, and she has to run with their childhood friend. It breaks her at first, but Yona soon realises that her father might not have been the good King she thought he was and as well as reaching a prophecy. She wants to become the Queen that her country needs to be.

This is a still ongoing series, I believe we’re in the 30s now, so there’s plenty for you to pick up if you’re interested.

Out of all of these series, this is one of the ones I’d recommend to people who are unsure about shoujo series or are just getting into manga and love fantasy series.

If I’m going to rec shoujo manga, I need to recommend at least one slice-of-life series. It’s the type of shoujo manga that I am least likely to pick up, but I saw some recommendations for this series myself and am having a lot of fun with it. I might not have been the sort of pervy as Erinko, but it’s fun to see a teenage girl being open about her desires and just being awkward and hilarious with it.

In this series, we follow Erinko, a teenage girl with a big social media following where she talks about fictional scenarios with her school crush. Until one day, she finds out that her crush isn’t quite as sweet as she imagined. He finds out about her account, and she finds out about the real him, and as they get to know each other, they decide to give a real relationship a go.

This series has been completed in Japan and is pretty close to the end in English. The volumes are very thin, so you can easily gobble several at once as you’ll have such a good time.

If you’re a character-focused reader then Erinko’s development even within the first volume will be very enjoyable for you. This series is a little silly but is super fun and I couldn’t recommend it more.

Onto the final series, and this one that you might not realise is shoujo looking at it! And for that reason, it’s one that new shoujo readers should give a go. This is kind of described as being shonen for girls, so it has all those elements shonen enjoyers enjoy but is more character and relationship-focused just without the romance. We all love a fun action series, so to pick up a manga like that without random panty shots and pervy characters? Yeah, that’s always a joy.

Servamp follows a teenage boy called Mahiru who lives a pretty normal life with his mostly absent uncle. But one day, he stumbles upon a black cat and decides to take it home to look after. Only, when he wakes up the next morning, the cat has seemingly turned into a human boy. This kitty that he named Kuro is a vampire and one that Mahiru has accidentally made a temporary contract with.

This isn’t your typical vampire series, even with each of the main vampires being personifications of the seven deadly sins. This series is mostly a lot of fun, though there are some very dark and emotional scenes and plotlines. This did get an anime series but one that only ran for one season a few years ago. The manga is still ongoing in Japan, but I believe it’s set to finish soon.

If you like to focus on action manga, Servamp is one to check out. This is the other title I’d recommend to readers who perhaps think that they don’t like shoujo as this is far from your typical shoujo series. But it’s still published in a magazine aimed at teenage girls. It’s the same magazine that publishes Sasaki and Miyano, so there’s variety in what they’re putting out.

Are you a big shoujo reader? Are there any series you’d have put on this list that I didn’t? Or are there any that you might be picking up now? Let me know in the comments below.